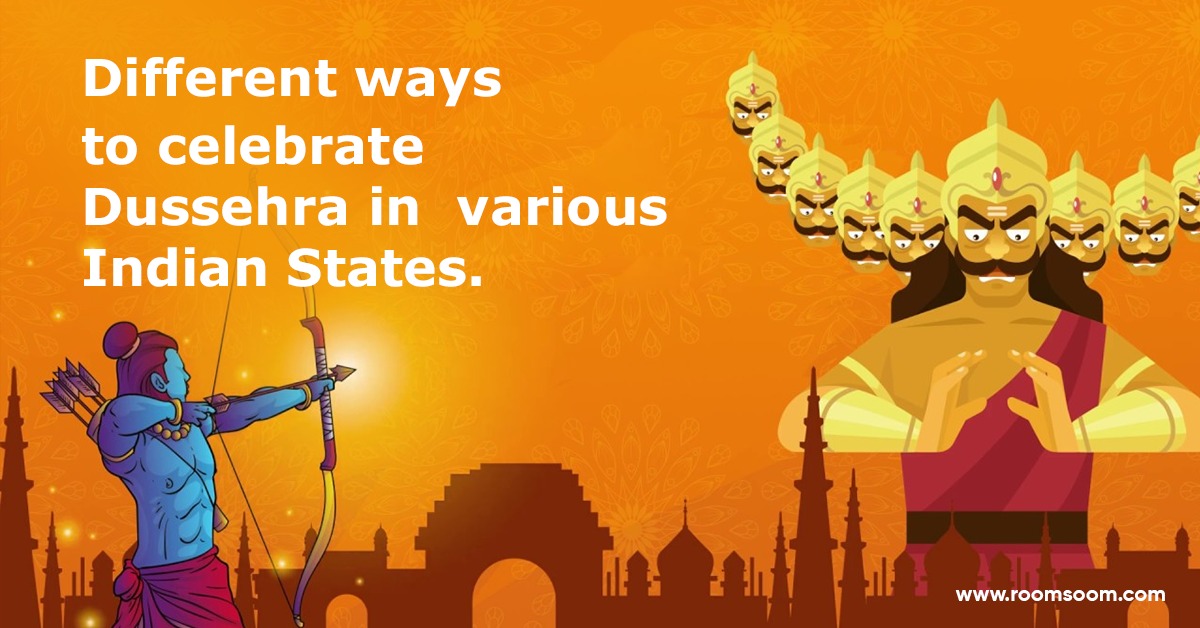 Durga Pooja is the festival of West Bengal and celebrated with lots of joys and light by worshiping goddess Durga, Ganesh, Laxmi, Saraswati. They set pandals in the town and murti of MAA Durga, which symbolizes Shakti (Female positive energy) and stalls of food where you can taste traditional food like puchkas and Rasgulla. People dance to Bengali songs wearing traditional attire and holding burning pots in hand. They celebrated this with very charm and excitement.

They celebrated the festival of Dussehra in Gujarat as Navratri. A long nine-day celebration where pandals are set in cities, you will find people dancing the entire night after aarti on traditional songs mainly stage performances by big Gujarati artists like Falguni Pathak and Gujarati celebrities. Men are dressed up in kedias and women are dressed up in lehenga choli and dance on traditional folk songs of Gujarat. . Navratri is a festival of color and joy for Gujaratis and you can enjoy some Gujarati food which is mouth-watering. It’s a different way to celebrate Dussehra in Gujarat.

In the state of India, Uttar Pradesh people celebrate Dussehra as a mark of victory of good over evil by setting Ravan on fire to mark the historical day. When Raja Ram kills Ravan because he abruptly kidnapped her wife Sita.

Ayodhya is a city in Uttar Pradesh where Raja Ram was born and has stories related to Raja ram. On this occasion, they set various towns in Uttar Pradesh with Ramleela pandal where 9 days of Ramayana are acted by artists. And on the tenth day, they do Ravn Dahan, which we call Dussehra, and victory of good over evil. Cities like Varanasi, Kanpur, Lucknow are the prime locations where these Ramleela pandals are set. This is a great example to embrace over traditional and aware our young generation of values and ethics of Raja Ram.

Chhattisgarh celebrates this festival for 75 days, and in different ways, they worship Devi Danteshwari. Unique rituals to perform on Dussehra in this state are pata jatra (worship of wood), deri gadhai (installation of kalash), kachan gaadi (installation of the throne for Devi Kachan), nisha jatra (night-time festival), muria durbar (conference of tribal chieftains) and ohadi (farewell to deities) on the last day. In the region, people dress in traditional attire to celebrate this day.

Himachal Pradesh celebrates Dusshera uniquely by worshipping Lord Raghunath. This festival plays a unique and auspicious place in the Kullu people. Where they celebrate for 7 days by running a long phool yatra and folk dance of Kullu with great enthusiasm. This is the best time to visit Kullu Manali to see their rituals and traditions. They decorated the valley with lights and flowers to mark this day. The fairs organized in the valley, like the Nainadevi fair and Kullu fair in October, are some of the well-known events to look out for.

Tamil Nadu celebrates Dusshera in a unique way by worshipping the goddess Laxmi, Saraswati, and Durga. Every house is decorated and dolls of goddesses are worshipped. The married women invite each other and celebrate this festival with great enthusiasm and dance to folk songs. They gift each other accessories related to matrimonial, coconut, and money.

In the Karnataka state of India, Dussehra is called “Dasara” is celebrates carnival-like. They hold the grand celebration on the road. There is the historical background of this festival. Belonging to the supremacy of haaleri king. On this day, Goddess Durga had killed the demon Mahishasura. They organize a parade in a state where all the god and goodness, statues are carried out. People enjoy this festival by dancing, they organize drama in parade depicting the history of haaleri king. On the last of the festival ‘Jumbo Safari” is carried out where people dressed in elephant costumes with golden howdah.