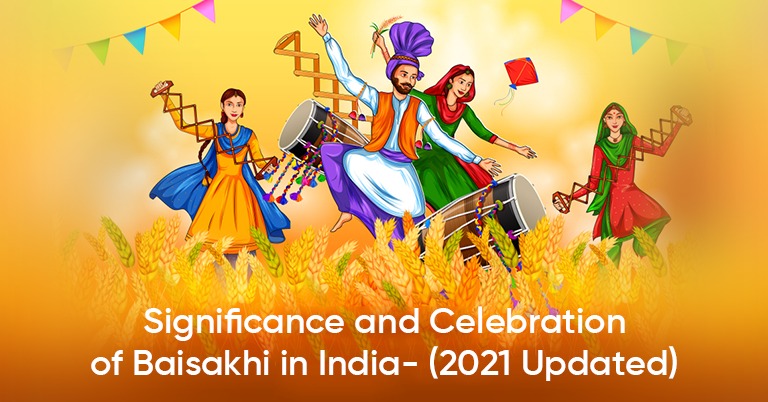 Significance and Celebration of Baisakhi in India- (2021 Updated)

The festival of Baisakhi, also known as Vaisakhi, is celebrated every year on April 13 and this day marks the Sikh New Year. For the Sikh community, it is the festival of spring harvest. Baisakhi observes the development of Khalsa Panth of warriors under Guru Govind Singh in the year 1699.

Baisakhi Celebrations in India also mark the birth of Sikh order which began after the exasperation and performance of Guru Tegh Bahadur for denying to change Islam on the orders of the Mughal Emperor Aurangzeb.

This year, Baisakhi is on 13th April 2021 that is on Tuesday. This harvest festival registers the start of the solar year. The festival is one of the most precious festivals of Punjab which has a special importance for the Sikh Community.

Punjab and many areas of Northern India gears up together to celebrate the festival of Baisakhi with great zeal and fervour.

On this precious day, the farmers give prayers to say thanks for the handful harvest of the Rabi Crop. This festival is also important as it marks the foundation of Khalsa Panth community 300 years ago by Guru Govind Singh, the 10th Sikh Guru.

Baisakhi is celebrated all over the country with full enthusiasm, fun and strength. The State of Punjab declares state holiday on the day of Baisakhi. Schools, Colleges and offices remain closed on this day to let the people celebrate the occasion.

Families and friends enjoy this festival by exchanging gifts with each other. Businessman also present gifts to their employees on the occasion of Baisakhi. There is also a surge in the shopping before the arrival of the festival. The shopkeepers declare sales and great discounts on various types of items.

The Sikh Community celebrates the festival by visiting Gurudwaras. They offer offerings such as Kada Prasad, a kind of halwa of semolina prepared with equal level of whole-wheat flour, sugar and butter, to their friends, family members, and the public.

It all started when the torture of 9th Sikh Guru, Guru Teg Bahadur, who was beheaded publicly by Aurangzeb. Aurangzeb wanted to spread Islam and Guru Teg was against it as he took a stand for the rights of Sikhs and Hindus. He was a threat for the emperor.

After his death, Guru Govind Singh stood up as new Guru of Sikhs. He chose Baisakhi as an event to convert Sikhs into the family of soldier saints which are also called as Khalsa Panths.

During the festival of Baisakhi, Guru Govind carrying a sword challenged any Sikh who was ready to give his life to enter the tent. But he returned alone in his tent with sword full of blood. He repeated the same thing four times till five men went into the tent. And they came out with Guru Govind wearing turbans. These five men known as Panj Piare were later baptised by Guru into Khalsa.

Punjab is a state which is rich in agriculture. As Baisakhi is the festival of harvest, it is a kind of thanksgiving to god. Gidda, Bhangra and Baisakhi fairs are the common programmes during this festival in Punjab. Baisakhi also marks the start of solar year. Sun enters the Mesh Rashi on this day and that is why this festival is also known as Mesh Sankranti.

Baisakhi is an auspicious festival for Hindus as Arya Samaj was founded on this day in 1875 by Swami Dayanand. It is also a holy festival for Buddhists as they have faith that Gautama Buddha attained enlightenment on this auspicious day.

In the areas of Haryana and Punjab, Baisakhi is celebrated with a lot of joy, excitement, and colours. Men and women both take part in Bhangra and Gidda performances. Big celebrations of Baisakhi are made in Amritsar, India at the famous Golden Temple.

Posts That You Can’t Miss:

Mahashivratri 2021: Significance and Celebration in India

7 Things to do when you are Bored at Home